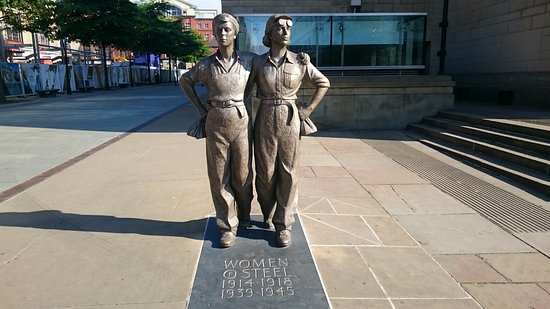 Every year on the 8th of March International Women’s Day is celebrated. A day of recognising the amazing social, cultural, economic and professional achievements of women. Whilst also continually campaigning for equality for all.

Our region and beyond has so many brilliant women to be proud of. This International Women’s Day we’re looking at the impact women have had on businesses past, present and future.

Inspiration of the past: Women of Steel

During the second world war, when the men of Sheffield were called upon to fight for our country, it fell upon the women they left behind to keep our city’s steel mills running.

Throughout the course of conflict, thousands of Sheffield women juggled family life with the high demands of the industry. Often working 13-hour shifts in dangerous conditions, so that our boys didn’t go without weapons, bullets and tanks.

However, when peace eventually came, those fighting returned home. The women were then quickly and unceremoniously dumped from their jobs. Their role has often been forgotten through history, until some 60 years later when they were gratefully recognised for their efforts by the city.

In 2016, Sheffield unveiled the ‘Women of Steel’ statue in honour of all the women who worked both courageously and tirelessly, to maintain steel production through Britain’s darkest hour.

Residents of the city came together and exceeded the £150,000 needed to create the bronze sculpture by Martin Jennings.

The female entrepreneurs of today

Luckily, as we enter a new decade, more recognition is given to those who deserve it, across multiple sectors. The number of women in business has come a long way over the years, with over a third (34%) of UK SMEs being run by women last year. This is an increase on the 19% in 2017, and it’s clear the strong aspirations of women in the North has never faded away.

The gender gap for small business entrepreneurs has also narrowed across northern cities. The number of women-owned businesses in Sheffield, Hull and Manchester surpass the national average.

A report by UENI on over 22,000 UK businesses found that more women are opening businesses than 4 years ago, and this is a trend that is continuing to grow.

Looking to the future

Despite the strides, there is still work to be done on gaining absolute workplace equality.

It has been announced a third of all board positions in the UK’s FTSE 100 companies are held by women. Meaning a key target of the government backed review has been met almost a year early. Business secretary Andrea Leadsom said “the Hampton-Alexander Review has done fantastic work. But it’s clear that women continue to face barriers to success, whether that’s through promotion to key roles or how they are treated by colleagues.”

Research by Instant Offices shows 20% of women in today’s workplace believe they are paid less than their male peers at a similar seniority. At the same time, men are almost twice as likely to become entrepreneurs.

Andrea added “Businesses must do more to tackle these issues and we will support them in doing so, including through our world leading reforms to workplace rights”.

The forthcoming Employment Bill will seek to better support women in the workplace. Including measures to enhance protections from pregnancy and maternity discrimination and subject to consultation, making flexible working the default.

Low expectations of this kind have caused women looking for funding to start out with an average of 53% less capital than men. Putting them at a significant competitive disadvantage.

In response to this we are now seeing the emergence of investment platforms specifically for female founders.

On the run up to International Women’s Day Alison Rose has this week unveiled the UK Enterprise Fund. This will be a joint initiative between NatWest-owned private bank Coutts and the Business Growth Fund (BGF). With the aim to bridge the biggest barrier faced by female entrepreneurs, and create better access to capital.

The partnership promises to identify and address the equality gap across the UK’s entrepreneurial ecosystem. Providing specific initiatives and programmes focused on female-led businesses. More information on this news can be found here.

Wosskow Brown Solicitors launched the Wosskow Brown Foundation in 2014. Since then the Foundation has helped over 900 businesses; and has made over 500 b2b introductions in the past 3 years.

Jim Lawson, the Foundation’s Programme Director, stresses that “understanding what funding is available is vital for business founders.”

The Foundation operates across the Sheffield City Region and welcomes contact from all businesses seeking funding. “We aim to help both the start up and growth of businesses, by directing them towards the correct finance options that suit them best. These include loans, investment, banks, venture capital and even social impact funding.”

As well as this we offer general business support and access to a  range of specialist and professional connections to support business growth.