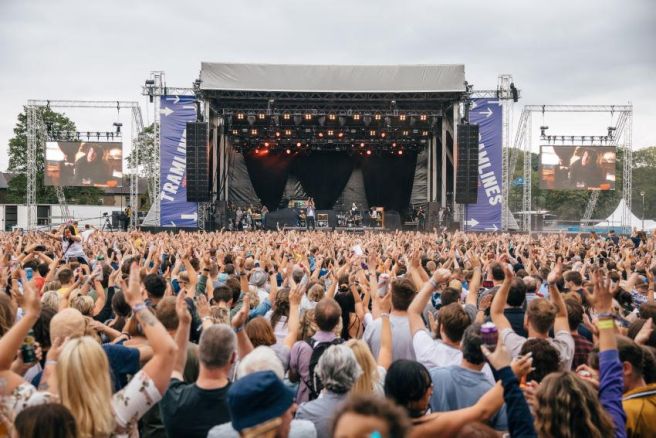 Later this month, Tramlines Festival 2019 will take place at Hillsborough Park in Sheffield for a weekend of music and entertainment.

This year marks the 11th anniversary of the festival and it really just keeps getting bigger. For its 10th year, it transferred to the grand Hillsborough Park and saw an unbelievable amount of talent across various stages.

From former Oasis songwriter Noel Gallagher, to hip-hop veterans De La Soul, Tramlines 2018 was a terrific show for the city of Sheffield.

After a couple of moves within the past few years, the festival will remain amongst the beautiful greenery in Hillsborough, right next to the Wosskow Brown branch actually!

It’s amazing how the festival has flourished; from Devonshire Green to Ponderosa Park to the massive Hillsborough Park. Now, Tramlines is making a name for itself amongst the best festivals in the country.

Just a short tram journey from the city centre, Hillsborough is a brilliant and accessible place to hold Tramlines. The space is gigantic and the numerous stages promise more than enough entertainment for everyone who attends; with comedy as well as music. Plus, there’s also a long list of food vendors offering delicious snacks and meals at their stalls. Furthermore, the vegan options at Tramlines 2018 were immense, and the same can be expected from this year’s group of stalls.

It’s undeniable that the growth of Tramlines is brilliant for the city and the Hillsborough area.

For last year’s 10th anniversary, the Tramlines team really pulled it out the bag. Thankfully, the line-up for this year’s festival is certainly not a let-down.

Two Door Cinema Club, Main Stage headliners on the Friday, are one of the most anticipated acts on the line-up. The Irish indie-rock trio are known for their catchy tunes and sing-along choruses; often tipped as the perfect festival band… So, if you’re attending Tramlines 2019, you’re in for a treat on the first night!

Former member of The Smiths, Johnny Marr, will take the Main Stage by storm on the Saturday night. After the release of his third solo album last year and fresh from a dazzling Glastonbury show last weekend, you can’t deny that the Mancunian guitar-legend is on great form at the minute. Expect a mixture of classic indie bangers written by The Smiths and also some of his own tracks, equally brilliant.

Chic feat. Nile Rodgers will top off the weekend by headlining the Main Stage on Sunday. Tramlines-attendees are excited for the disco band’s live show, which is sure to be packed with the grooviest throwback-songs you can imagine. Their funky baselines mixed with the legendary guitar style of Nile Rodgers are sure to get the crowd in Sheffield dancing along to the infectious sounds.

Aside from the Main Stage

An absolute must-see is the emerging Jade Bird; Saturday on T’other Stage. At the age of 21, the talented singer-songwriter is experiencing a staggeringly good start to her musical career. Her self-titled debut album was released this year and she has since played Glastonbury. With further appearances on The Tonight Show Starring Jimmy Fallon and Later with Jools Holland, she’s going from strength to strength. With the simple-but-effective combination of her strong, unique voice and the sound of her acoustic guitar-playing, Jade Bird’s live shows are unmissable.

Originating in Castleton, Derbyshire, Drenge are relatively local lads and will headline the Leadmill Live stage on the Sunday. The three-piece rock band, which includes two brothers, relocated to Sheffield five years ago. Since then, they have released two garage-rock albums, after their 2013 debut album ‘Drenge’. They’ve played shows and festivals all around the world alongside the likes of Wolf Alice and local legends, Arctic Monkeys.

Scouse sextet, Red Rum Club, will headline the Library Stage on the Friday night. Having played a great number of gigs in Sheffield, the Liverpool group call the Steel City their ‘second home’. Coming from Liverpool, they simply have ”that sound; that unique sound all scouse artists seem to be blessed with. This, with the addition of a strong, solitary trumpet, creates a sound like never before. Their shows in Sheffield are always successful, with many Cafe Totem gigs over the past few years and a packed-out Record Junkee set during their headline tour this Spring. They also played a couple of shows in the city centre during last year’s Tramlines weekend. The Tarantino-esque, Scouse-Americana group are not to be missed.

Otis Mensah is a young rap-poet making a name for himself in Sheffield and beyond. He’ll be performing at the Speakers Corner in Hillsborough Park on Saturday 2oth July. His spoken word poetry touches on topics of existential commonalities and everyday life transformations.

He also independently makes and releases music and has been touring his latest album ‘Mum’s House, Philosopher’. His recent shows around Europe and the UK include Glastonbury, Poetry Meets Hip Hop (Berlin) and Hip Hop Kemp Festival in Czech Republic.

Otis has formed a relationship with Magid Magid, former Lord Mayor of Sheffield and now MEP. Magid actually appointed the young poet as the first ever Poet Laurette of Sheffield. This role requires him to try to break down the assumptions and stereotypes about what being a poet means.

Under 12s are allowed to attend for free if they’re with a paying ticket holder, and there’s more than enough going on for them to enjoy.

The ‘Into the Trees’ area was especially designed with families and children in mind. There’s no way your kids will get bored here!

Responsible Fishing is a small arts organisation that works with natural, recycled and up-cycled materials to create artworks through workshops and community arts projects. On Saturday and Sunday, the organisation will be getting kids involved in activities with their woodland workshop.

Once the kids have become tired out from all the woodland fun, Into the Trees also features a pop-up cinema so you can sit back and enjoy a film.

Don’t forget; our Hillsborough Office on Middlewood Road is right next to Hillsborough Park! Pop in for some rockin’ legal advice while we’re open on the Friday (19th July) – our door is open for you!

So, surely that’s more than enough reason for you to support Sheffield and its amazing music scene! Tramlines 2019… be there!